The ice is soooo close to being gone! Here are some photos from the last few days of watching the thaw. Usually the ice melts by the end of April, not March. The birds have returned and the sounds of life are back filling the air. Gone is the still silence of winter and I know we have survived yet another of the coldest and darkest seasons. To be honest, the only thing I used to love about winter was downhill skiing but since we moved to the lake, I admit I really enjoy winters now. Even when the temperature goes to -30 C for days on end. I love being cozy by the fire and watching the snow swirling about outside.

It has been a stunning morning on the lake. Here are a few pics from about an hour ago. Ice is almost gone!!

Last night I was returning from the grocery store (where the air conditioning was on) and found myself swerving for frogs on the road, watching white rabbits scatter frantically unamused their cover was blown, and arrived home to the full chorus of spring peepers. Is this March?!

Hard to believe about a month ago we had 20″ of ice. Here, I was skiing on the lake while pulling my 5 year old on her sleigh when I came across this deer carcass frozen in the ice.

I also snapped this pic and later noticed my daughter looking like she thinks she may be a little to close to the creepy thing in the ice!

I shutter to think about what happened to the poor thing and hope it didn’t suffer much. It sparked lots of conversation later with my daughter. The kids learn a lot about the cycle of life and death when living in the country.

Anyway, I began with these 3 photos to make a point, and that being this is how the lake looks today,

and about 2 days ago.

I have a feeling the ice may completely be gone by Friday if not tomorrow already which is about one month ahead of the usual annual thaw. I must admit I am LOVING the weather but also a little leery about what this means for the lake and the summer ahead.

A little blog that is a visual journey about nature, family, friends, food and general life on a lake in Ontario, Canada. 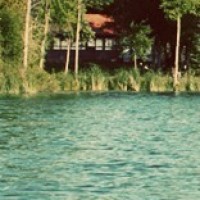